It has been over 24 hours since Reade was admitted to the hospital, but to me it feels like he has been there for days. These pictures are from yesterday so scroll down to the video at the bottom for current updates.

Reade when I first saw him yesterday: 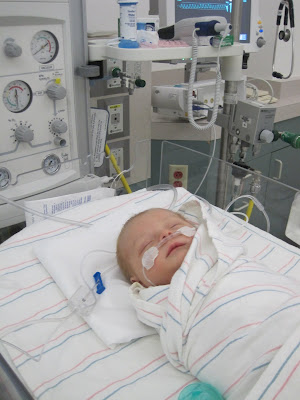 Holding my little one: 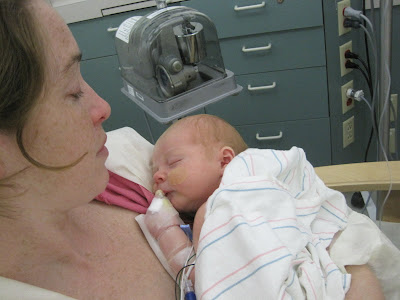 His bed. Blake was with us when Reade was admitted and loved the giraffes on his bed: 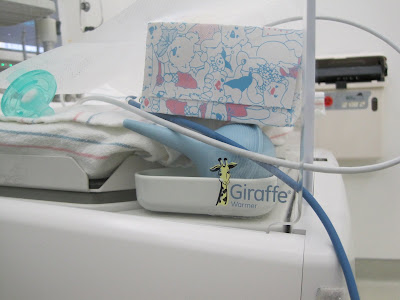 Before I left last night: 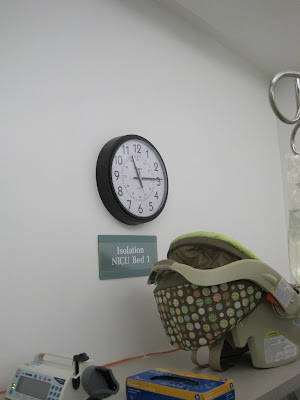 Ok, now for the updates. When we were in the pediatrician's office they knew for sure that Reade had a raging ear infection in his right ear and that his oxygen levels were low so his breathing was compromised. Tests were done and they said he had pneumonia in his lower lungs. The neonatal doctor told me he thinks Reade has pneumonia throughout most of his lungs. A battery of tests were done to narrow down the infections, if there were any, so they could target them with specific antibiotics. His meningitis test came back negative, as well as a slew of viruses. This means that he got the pneumonia from the cold he has. They ran swab tests today to rule out pertussis (whooping cough). They sent me into the pediatrician's office to get swabbed myself since I am still getting over the cold myself. Those tests won't be back until this weekend, but if he does have pertussis they will just start him on erythromycin which can be given at home orally. Forgive me because it is late, but some level of something came back high today (average being a 1-2 and Reade was a 14) so that is why they are checking for whooping cough. Anyways, it looks like he will be on these two antibiotics (via IV) for 5-7 days more until his levels get better.

He has been such a champ and I have finally calmed down a bit. All I could do was sit in the rocking chair holding him and cry my eyes out. I tried to keep it together, but the guilt of leaving him alone in the hospital tears me up inside. I feel like I am abandoning my baby, but I know he is in good hands and I am trying to get some sleep so I can get through this with some sanity. Last night I stayed at the hospital from 9pm until 11:30pm. I pumped three times during the night to keep my milk supply up and allow the hospital to feed Reade while I am away. Today, I spent 8am-9:30am with him, saw him while Blake napped (my mom arrived), and then headed back with my mom from 6pm until 9pm this evening. I am completely wiped out so I decided to come home, eat, pump, and go to sleep. Reade looked so much better today and was super happy when Andrew came by to see him during his lunch break. My mother got to hold him during his respiratory treatment and when the doctor evaluated him.

Tomorrow, I will probably do the same thing and see Reade as frequently as possible. Oh, and he was taken off oxygen last night so that is a good thing. His IV, blood pressure monitor, and oxygen level lead were hard to navigate around, but I am getting used to nursing him and moving him around without too much trouble. It is such a pain to do all this while wearing a bulky gown and gloves. I was supposed to keep the gloves on, but I wanted to touch my baby so when the Nazi Nurse switched shifts I threw them away.

Reade is doing great and I am not worried about his condition. He will get better so soon and we will all get to hang out in the same room again. Blake asks for Reade constantly and played with his three stuffed toys today. I was showing my neighbor his pictures and Blake took the camera and kissed it. He is very sweet about the whole thing and comes up to me to wipe off my tears. I try my hardest to calm down around him, but my fear/feelings are hard to hold back sometimes.

Thank you for all of your support and I would love to talk to each one of you, but I have been super busy going back and forth. When I get into a calmer routine I promise I will start talking to people again, but right now I am a bit drained. Here is a little video of Reade hanging out. Everyone loves his red hair and loves his name so I am completely okay with my choice now. I hope he sleeps well and rests for tomorrow. Until the sun comes out again, adieu.

Glad to hear Reade's doing better! Shannon, if you need anything, someone to sit with you in the hospital, someone to bring you lunch/dinner, watch Blake (if he'll allow me!), feed the dogs, have someone to vent to, ANYTHING - please please please call me day or night. You know me, I feel at home in hospitals and am awake at the weirdest hours. I love reading your blog and getting updates from your family. Don't feel bad about not talking to everyone individually...I'm amazed you have time to update your blog! Give both of your boys a hug for me and rest up when you can.

Best wishes for a speedy recovery, Reade. Home will be twice as nice the second time you leave hospital!

Get better soon little buddy! And get some rest, Shannon (easy for me to say). You guys are so strong.