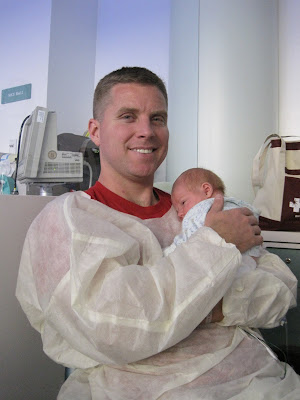 Last night, Andrew and I had a great date night at the hospital. You can see how tired Andrew's eyes look at midnight, but that is the life of a new parent! I have come to cherish my late night feedings because I know I have to leave Reade to get some sleep.

Our insurance company started making a stink saying that Reade should have never been in the NICU because he is too old. The doctor called them back to "dance the dance" so they wouldn't have to move him downstairs to children's hospital today. They finally gave the okay so it looks like we will finish out our care in the NICU. Speaking of care, the doctor feels we will get to go home on Sunday. Yippeeee. She feels that because, A)he is becoming more stabilized, B)he will be old enough to take antibiotics orally, C)the IV is likely to come out soon and she doesn't want to put him through more stress, and D)she will be fighting the insurance company to keep him in a bed that the end of the hospital stay is close.

The neonatalist came by yesterday and told me that Reade will now be prone to bronchial issues so we should invest in buying a nebulizer. We pick one up to rent today at the pediatrician's office, but she recommended having one on hand so that we can be on top of colds/coughs so he doesn't end up in the ER again. I guess Reade is at a higher risk because he now has pneumonia under his belt and I was asthmatic as a kid. She also gave me instructions to not let Reade be near other children until he is at least three months old. I asked about taking Blake to places like drop-in daycare and she replied, "not if you have to." So it looks like we will be in lock down for a while (which I kick myself for not doing in the first place) until we get to our magic safety date. I know people say he could have gotten germs anywhere, but since we live with neighbors who are from: South America, South Korea, and Russia, I have heard it over and over about how new babies are kept inside and away from people for at least a month. I now have first hand experience of what can happen with a sick baby so I warned Andrew that I am going to be a guilt laden, overprotective mom from now on. I am sure I will calm down once the dust settles.

I think that is all regarding the updates. Reade weighs 9lbs, 1oz. right now (I guess he lost some weight). The respiratory therapist said he sounded good when he came by for last night's treatment. That made me happy and I am really looking forward to having all of my family at home. Time to jump in the shower to start another day of back and forth. Well worth it though.
Posted by Shannon at 6:42 AM