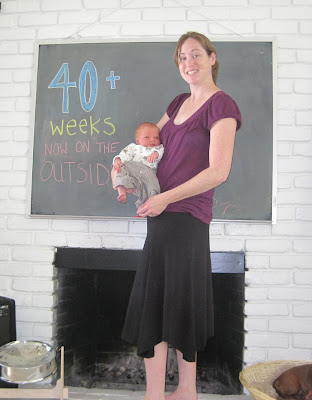 Here it is. The last installment of my pregnancy photos. Still no makeup or styled hair, but what do you expect from me?

Reade had his two week checkup this afternoon. He now weighs in at 8lbs, 7oz. I like that considering he weighed 7lbs, 8oz. at birth. He weighed 7lbs, 2oz. at his first appointment and they like to see them weighing their birth weight or just above. Reade impressed the doctor with his hefty weight gain. He is still a bit jaundiced, but the doctor told me that could take three months to disappear since breastfed babies' livers process biliruben slower than formula fed babies.

I read my new parent pamphlets and asked the pediatrician about nursing at night. She said to go ahead and help Reade get on a better schedule regarding daytime vs. nighttime feeding. So now I need to help Reade stay up longer during the day, fill him to the brim with milk before bedtime, and hopefully watch as he "magically" starts sleeping better at night. Good advice, but sometimes hard to follow. The biggest change we need to make is helping him to fall asleep on his own. He likes to wail like he is hungry and then when I start to nurse him he just soothes himself until completely limp. When I try to put him in the bassinet his eyes pop wide open and we do that rediculous routine over again. My pediatrician recommended getting Andrew earplugs if I am that concerned about waking him up. I worry about Blake too, but we all know he will adjust better since he is behind two closed doors and a hallway. Baby steps to independence.

My cold is just now starting in so these next few days should be fun. Blake looks like a truck ran over him and Andrew is on the up and up. Please let Reade slip under the radar on this one (my hands held in prayer fashion with my eyes up to the baby Gods).
Posted by Shannon at 2:14 PM