I have passed my 39 week mark and am working towards 40 weeks! It was so thoughtful when a friend brought me flowers today from her garden. I feel like I have been stuck in such a self-centered state for so long that it was good to just hang out with a friend and let our kids play in our cul-de-sac. I hope I can return the favor when my head is out of this pre-laboring cloud. 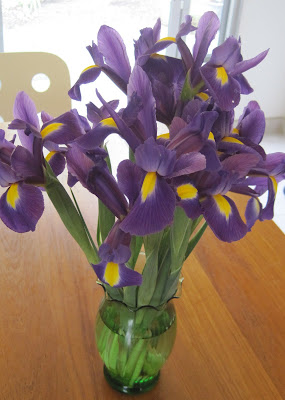 Do you think we get out enough? Here is my child taking photos of the outside world through the doggy door. I promise he got to ride his tricycle today: 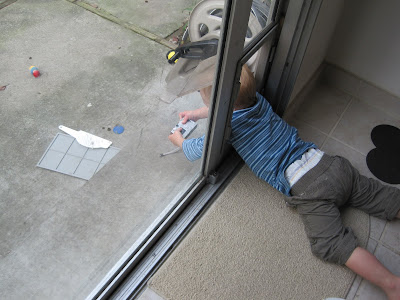 Pregnancy update: I had another prenatal appointment today. My midwife told me I am a bit more dilated and she wouldn't be surprised if baby comes sooner than later. I left her office feeling confident that all was well. About an hour later, my midwife called me back saying she was concerned about my headaches and vision spots. She called my OB and he suggested I go into his office and have some tests run to rule out preeclampsia. My OB is on vacation so he thought the other OB would still be in the office, but come to find out everyone had gone home. So the other OB told Rosanna which tests to run so I headed back to her office for another visit. She drew my blood, did a fetal stress test, and checked my urine. She just called around 9pm to say my lab work came back just fine, but the OB needs to go over it to make sure. I still can't believe how quickly things can get done. I still can't believe my OB is on vacation in Mexico and still answered Rosanna's email! Poor doctors, they never get a break (darn Smartphones). Anyways, so I have been having mild contractions every five minutes since leaving Rosanna's office. We will see if they develop into anything overnight. I am just praying that I don't get a call tomorrow from the OB saying he wants me to go to the hospital for monitoring. I guess that would probably mean they would induce and want me to have the baby. Well, this paragraph is huge so I should probably stop now while ahead. I hope I have good news for everyone by tomorrow, being a baby or a pardon by the OB.

P.S. These headaches and vision spots are not a new concept for me. They were the reason I did all the lab work two weeks ago. I know they are red flags, but I have always suffered from migraines and remember feeling a bit like this with Blake's labor. The only difference between the two labors is that Blake came six days after pre-laboring so there wasn't a lot of time for symptoms to develop. I am not questioning authority, but feel deep down this is just how my body does this. Relax, deep breath, off to bed.
Posted by Shannon at 4:36 PM

I made the blog! Or at least my garden did :) Oh, and I can totally vouch that Blake was outside and riding his heart out on his tricycle yesterday. Man that kid has skills on his tricycle! Go Blake!