My ex-best friend and I would spend hours conjuring up fabulous invention in college. We soooo invented vertical blinds with Disney characters on them before anyone else. There is one idea that I never seem to forget about and that is the LED scrolling text advertisement for the top of the back windshield of your car. That way you can punch in anything you want to let drivers behind you know exactly what you are thinking. For example, "I am going to slam on my brakes buddy if you don't put two car lengths between us ASAP" or (back in my single, college days before Andrew) "Can I have directions? (To where?) To your heart."

I think I would just settle for this: 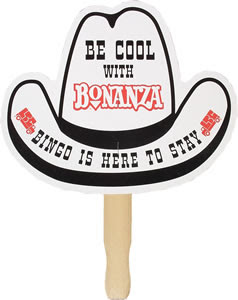 Except, I would have written "I just called the police to tell them what you just did" instead. I was driving safely in the carpool lane and some idiot decided to cut right in front of me just to pass the car in front of him. So maybe I have been a little short today and shouldn't still be thinking about a silly incident that happend over six hours ago? I just had to get it out.

I told Ellen about that fabulous estate sale and she drove by their house late at night just to see if there was anything available. I thought she was nuts. She then texted me saying everything was out on the driveway still. I drove by today and that table was still there yelling out to me. I emailed the woman while standing in the middle of the driveway and five minutes later I was loading it into the back of the van. She sold me the table for $10! She wants me to come by tomorrow to tour the rest of the house "just in case." Now I am debating whether or not I should buy the original chairs that went with the table for $10 extra bucks. Hmmmm...decisions, decisions.

A teaser of the table. Oh, the two-toned formica top. I thrifted the sweet teacups today and was stoked to find three dessert plates in the pattern below. I am now on the hunt to find more of these plates. The cup and plate don't look so great in the nighttime light: 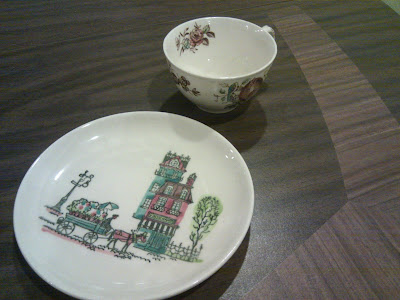