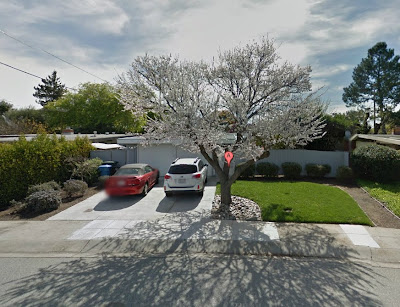 We live in a Mackay, not an Eichler. We do not live in Midtown Palo Alto, we live in East of Midtown Palo Alto. It has been a wild goose chase to try and find any information about this guy. I know that he graduated from Stanford Law and grew up in Los Angeles. His company, Mackay Homes, was once in downtown Menlo Park. I also found information stating he retired in Montana as a cattle rancher (could be him?). Here is what John Fyten's website states:

Got a Mackay? Good luck finding any information on it. All you need to know about the outsized nature of the Eichler mystique is that John Mackay, a guy who built a zillion ranchers, both contemporary and conventional, is almost entirely forgotten today except for a passing mention in one of Ned Eichler's books, a small park in San Jose and the occasional surviving sales brochure.

Overview: Real estate agents often blur the boundaries between this area and adjacent Midtown. Sometimes that's justifiable, since the MLS area boundaries can be arbitrary. And even if this isn't Midtown proper, many homes here are within easy walking or driving distance of Midtown shopping, and a few neighborhoods just outside the boundary resemble Midtown because the same builders built them concurrently. But things change as you move east from Midtown toward 101 or Loma Verde, from small but charming late-'40s ranchers to slightly larger contemporaries from the '50s.

You don't buy into this part of Palo Alto for its history, but history is here if you look hard—and quick. Rapidly disappearing, and almost buried under the acres of tract homes, are old farmhouses left over from the days when Santa Clara County was an agricultural powerhouse called "The Valley of Heart's Delight". Virtually all these relics are very small and humble, a telling sign that no one was getting rich at whatever they were doing before the developers bought them out. Another piece of this area's history concerns the struggle against housing discrimination. Lawrence Lane was developed in the early 1950s to offer housing to all races, this at a time when racial restrictions in neighborhood CC&Rs had only just been declared illegal in California, and when de facto segregation still kept minorities out of white areas. But this area's best-known claim to fame is also, ironically, the bane of many buyers looking for a home here: the nationally-known, architect-designed contemporaries of Joe Eichler.

Contemporaries or "flattops"—Eichlers, Mackays, Brown & Kaufmans and a few others—are such a big part of the housing stock in this area that I'll give you a little more detail on these homes as I mention them. They may all look alike to the unpracticed eye, but not every "Eichler" is an Eichler-built home. Why does that matter? Because even if you're not actively looking for a contemporary, just knowing the differences between builders may help you make the right decision. Mackays can be found in two adjacent developments built in 1954-5, Elmdale and Colonial Court. Of these 110 or so homes, most were offered as either a 3/2 of 1240 sq.ft. with radiant heat (just like Eichlers) or as a 1200 sq.ft. 3/2 with cheaper wall heaters. They're built on slab and have hardwood floors. One way to spot them is their gated entry courtyard, which enhances the California "bring the indoors outside" lifestyle by providing more outside space for playing and entertaining.

The real characters were these guys. Anshen and Allen were the architects who built this house and hundreds more for Eichler and other mid-century developers. Find their fun story here: 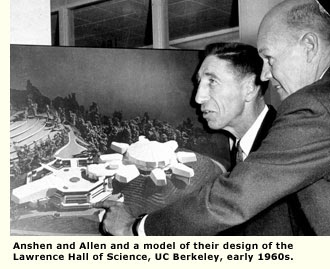