Today was weird.  Here was the breakdown:
* Babysitter came
* Took baby to doctor for shots
* Received phone call about family member (Jim, I am thinking of you)
* Fed two, hungry kids lunch
* Held baby because she started to get fussy
* Started making soup (see photo below)
* Baby woke up screaming and didn't stop until I gave her some infant Tylenol
* Finished making soup with baby in the sling because I felt bad for her
* Got kids together (after nap) to deliver zucchini bread to new neighbors
* Reade fell off his truck at the last, new neighbor's house leaving blood on their new driveway and quite the first impression
* Mosquitoes bit us unmercifully on our way home
* Got into the minivan, after applying band-aids and nursing the baby, to deliver soup to friend
* Realized it was 6:18pm and reached for my purse to call Andrew to let him know where we were
* Realized I had forgotten my purse
* Turned around and went back for my purse
* Called Andrew
* Drove back and forth and around the block with crying baby since Andrew said he was biking home and was two blocks away
* Drove to friend's house with soup and family members
* Came home, reheated left-overs, ate dinner
* Went on a walk around the neighborhood
* Put kids to bed (actually Andrew did that while I nursed the baby)
* Kissed kids goodnight
* Picked up Legos
* Watched the Daily Show
* Blogged

Just feels and sounds so weird.  I can't believe that all went down in one day. 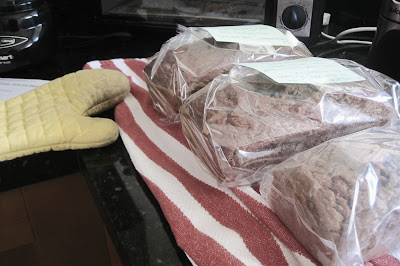 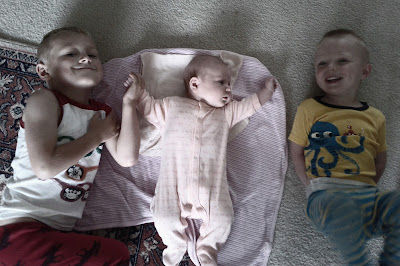 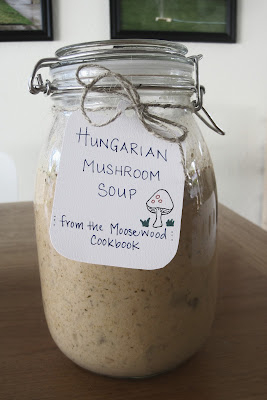 This blogger thing confuses me, but i have been looking at yours so figured i would leave a comment. I am like a 80 year old in a 30 year old's body when it comes to this stuff. I love your mushroom soup with the label, what a great way to make it cute. What you are able to do while taking care of 3 kids makes me feel like I need to be more productive.