My mother has started preparing her time honored Cranberry Salad.  It is a mixture of sugar, cranberries, and marshmallows.  She used to cut large marshmallows in quarters with scissors until she realized that my grandmother didn't have the option of using mini marshmallows.  We were giving my mom a hard time about counting out hundreds of mini marshmallows one by one so we decided to get out scales and do some math.  One Economics major,  one Computer Science major, one English major, and one Psychology major later and our problems were solved.

The answer is eleven. 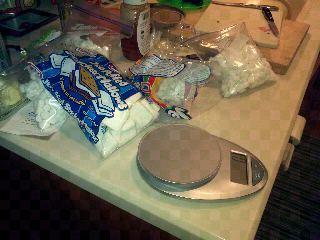