Last Thursday night I got a wonderful call at 3:30am that Andrew's cousin Erin was in labor with her first child. Thirty minutes later, Blake and I were in the car headed towards Sacramento/Stockton so I could be there as moral support. I dropped Blake off at my parent's house and arrived at Erin's house at 7:30am. Erin's birthing plan was to have Holly at home with the assistance of a midwife team and the support of her mother, husband, and myself. When I arrived, Erin was laboring in her bathtub and was more beautiful then I could ever imagine. She continued to labor around the house, but at 2:30pm severe back labor set in. Baby Holly had gotten into a position that sent Erin into extreme lower back pain. After trying some different strategies, the decision was made to head to the hospital so Erin could get some needed pain relief so that her body could relax and allow dilation to happen. Erin's body did exactly that once she received her epidural (that only worked on half of her body) and she was able to birth Holly at 9:50pm. I was so relieved to hear she didn't need a C-Section and was able to push her out on her own. The hospital was only allowing two guests in the room due to H1N1 so I ended up heading back to my parent's house around 4pm. Erin was so brilliant as a laboring woman and inspired me in so many different ways. I was so lucky to have been part of her home birth laboring team and am so happy that Holly is finally in Erin and Cliff's arms safe and sound.

Please allow me to welcome Holly Ginger Hoffman
Born at 9:50pm on December 11th, 2009
Weighing in at 7lbs. 8oz and measuring 20.5 inches long

I was lucky enough to meet Holly the next day before I headed back home. I tried to let Cliff and Erin hold her the whole time, but my heart started bursting so I had to snatch her out of Cliffs arms for some sweet, baby cuddle time. Oh, her tiny hands. Oh, her tiny baby sounds. Oh, her precious, silky baby hair. Ok, I will stop now: 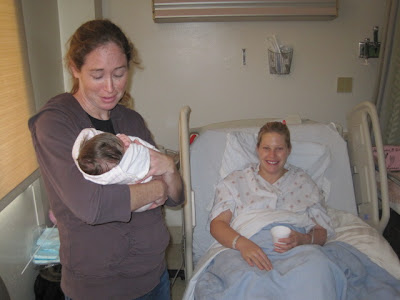 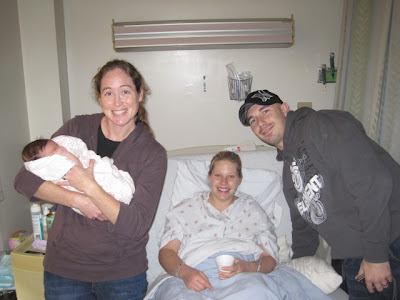 Mommy with her baby bundle: 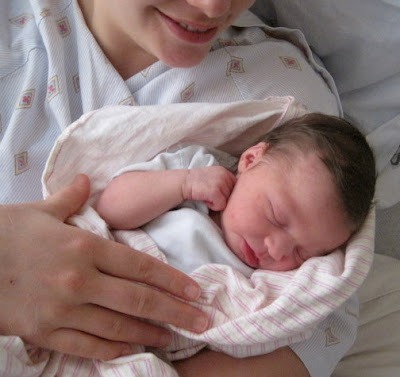 After laboring for 20 something hours the family finally has their prize: 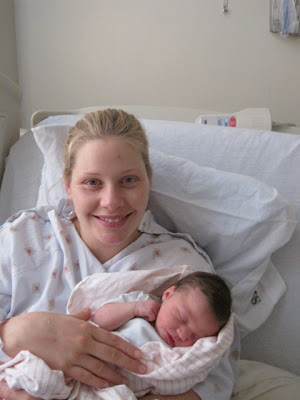 I have so much love for this family and I can only hope these beginning days are filled with calm and nights are peaceful! I am counting down the days until Christmas Eve when I will see them again. Unfortunately, I will have to share her with all of the other family members.
Posted by Shannon at 8:33 PM