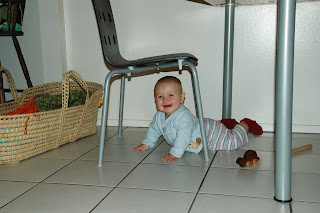 First off I'm adding a photo here of Blake because heaven forbid we go more than a couple posts without a photo of him. This was on my camera when I left, and its of Blake working himself into the corner of the kitchen doing his backward crawl thing. 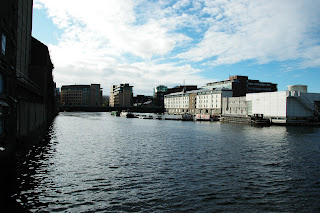 I've uploaded some photos from my trip to a picasaweb album at an album here, but I'll add a few here as well so you don't have to click through to see them.

To the right is a photo of the canal near my hotel, I took it while wandering around yesterday. 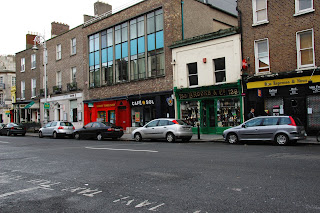 And here's a photo of one of the streets I was walking down. The town was pretty empty on Sunday when I was walking around, nobody really out and about. Monday morning and last night it was much more lively.

Last night my friend Ryan and his wife went with me to the Porterhouse brewpub and we sampled all of their beers. Apparently if you show up there with a bottle of beer that they don't have, you get a free pint! I should have brought some homebrew.

Well, its 11am here and I should really start working. I'll try to get around and take more photos tonight, and post another update tomorrow.
Posted by Andrew at 2:51 AM