I am sick of making decisions. Isn't that adult sounding of me? Anyways, the Eurovan has had a rough couple of months. Ever since getting our transmission rebuilt we have had nothing but problems with the right, front wheel. First, a bolt came loose when I was in Sacramento, which resulted in the worst noise I have ever heard in a car. Then, today the boot broke and left me on the side of the road (thank goodness we are between storms). Back the Eurovan went to AAMCO and of course they said, "That isn't our problem." So now we are in a game of he said, she said so hopefully this will all resolve itself with some sort of dignity. This is the first time Andrew has had to rescue his family off the side of the road. He is ready to sell the thing. I was just finally coming to terms with the van and fell back in love with it. What's your opinion? Sell the thing or drive it into the ground since we dumped so much money into it? Just curious. 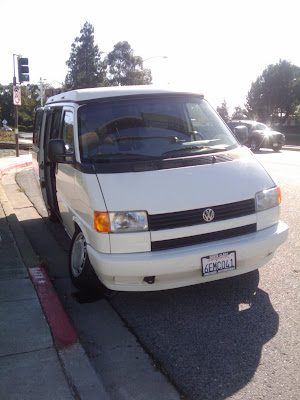 what's "the boot" and why does the front wheel look like it's falling off of your van?

Hi Shannon - I called Brett, read him your problem and he says "the axle is probably not in all the way." He suggests taking it to a third party. He said he would look at it for you, but then I told him you weren't in the neighborhood!!! Hope this helps. Anne

The ball joint popped off, causing the tire to lean inwards at the top. We towed it to a mechanic down the street (with our current mechanic's permission) and there seems to be a problem below the transmission. We just had our transmission rebuilt so we are just waiting to hear from this mechanic if it is a new problem or related to what AAMCO did. To be continued...

um. is there even a question here?