Here is the first cake I made since having Blake. I was so proud of myself until I realized the mistake I had made. Instead of measuring out the butter, I thoughtlessly put all four sticks of butter into the mixing bowl because they were on the counter coming to room temperature. All four!!! The recipe called for two sticks of butter so let's just say it came out a bit dense.

The cake was made for Andrew's co-worker's going away BBQ because he is transferring over to the Zurich office for a while. Inside, the cake was checkerboard (I was too upset about the butter mishap to care about taking a photo when it was sliced). Everyone ate it and said it was good, but I suggested eating broccoli for a week to counteract the high fat content. The cake says, "Zurich awaits."

I had originally wanted to make small Swiss flags and stick them sideways in chocolate icing on top, but with a baby at home priorities shift. 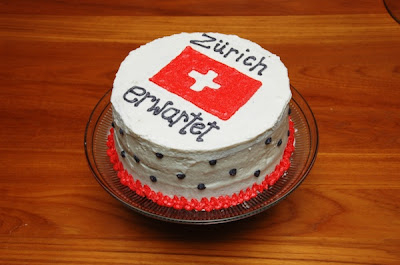