Blake has a new fascination with army guys.  He requested army guy videos on YouTube so I compromised with a few Google images.  For your information, a search for "army guy" will only produce a surprising amount of pornographic material.  So after exposing my son to 30 or so of those images I found that a simple search for "army" was good enough.

I still didn't do right.

He ran around other campsites playing Army Man and ended his battle in the RV.  He did a karate kick move in the hallway, fell into the shower, and almost took out his eye with the wooden spoon he called his gun.  Darn boys. 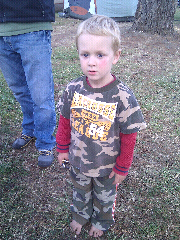